5 Ways to Identify a Planned Giving Prospect for Your Nonprofit

Planned gifts may be the best return on investment your fundraising program will see. Planned giving are those donations that are planned to occur in the future through a will or trust.

It may be difficult to quickly look at your donor file and identify who has potential for planned giving, it isn’t enough to simply look at demographics and assume older donors want to give through their estate. To be frank, most of your donors are likely older than the general population, so you need to be more discerning to identify who the right prospects are for planned giving.

Regardless of the size of your organization, identifying planned giving prospects should be a priority for your development team and a key part of your major donor strategy. Why? Because planned gifts are typically larger than annual gifts and can provide a much-needed boost to your fundraising efforts. But how do you go about identifying these prospects?

These are five ways to segment your donor file and identify the prospects with the most potential.

One to tell if someone might be ready to make a planned gift is to consider their age and philanthropic history. Generally speaking, people over the age of 50 are more likely than younger people to consider making a planned gift, although there are always exceptions (such as younger donors who have been particularly moved by your organization’s mission). As for philanthropic history, look for clues that the person has made charitable gifts in the past, either through direct donations or via bequests or other estate planning vehicles.

Not all planned gifts are equal; some are worth far more than others. When you’re looking for potential planned giving prospects, be sure to consider those who have the financial means to make a major gift. Even if someone doesn’t have the ability to give right now, if they have the potential to make a large gift down the road, they may still be worth cultivating as a prospect.

One of the best indicators that someone might be interested in making a planned gift is if they’re already a longtime donor to your organization. If someone has been giving to your nonprofit for years, they likely feel strongly about your mission and would be more likely to consider making a larger gift through planned giving. 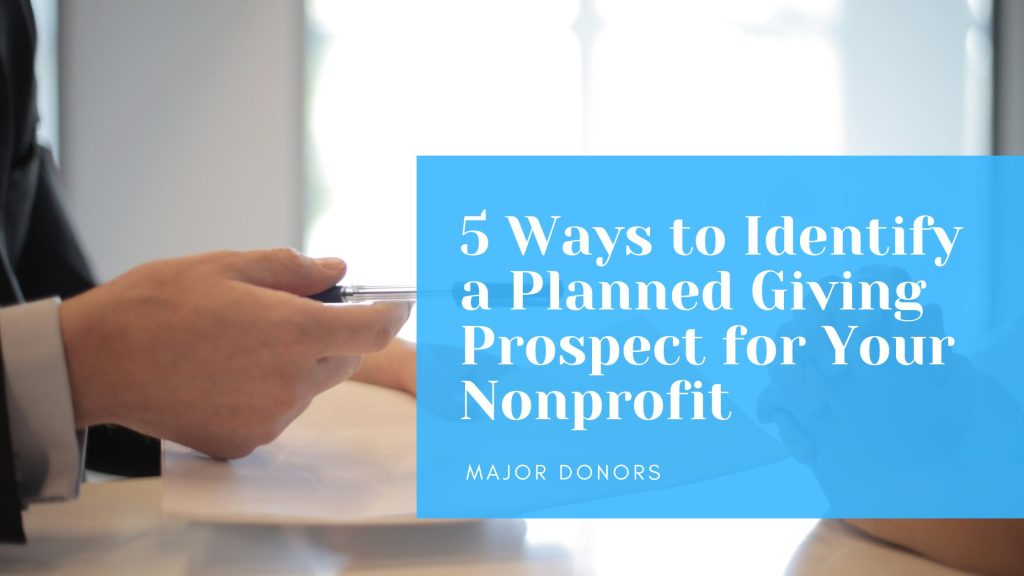 Another good indicator that someone might be interested in planned giving is if they’ve made recent major gifts to your organization. This could mean that they have the capacity to make a larger gift and are already passionate about your cause.

If someone volunteers for your organization, chances are they care deeply about your mission and would be open to making a financial contribution as well. Volunteers are often some of the most loyal and generous donors, so they’re definitely worth cultivate as potential planned giving prospects.

Sometimes, the best way to identify a potential planned giving prospect is by asking another donor if they know anyone who might be interested. If you have a donor who’s already knowledgeable about planned giving and is supportive of your organization, they may be able to help you identify other potential prospects.

Regularly attending your events is another sign that someone might be interested in making a planned gift. If they regularly show up and support your organization, it’s likely because they believe in what you’re doing and would like to see you continue succeed long into the future.

Another way to tell if someone is ready to make a planned gift is to see if they’ve made previous gifts to your nonprofit, either monetary or in-kind. If they have, that’s a good sign that they’re already invested in your organization and its mission. You can check for previous gifts by looking at your donor database or, if you don’t have one, by doing a quick search of public records such as 990 forms (for US-based nonprofits).

When someone has a history of philanthropy, it’s much more likely that they’ll include charitable giving in their estate planning. If someone has given generously to your organization in the past, there’s a good chance they’ll want to continue that support after they’re gone. Look for donors who have increased their level of giving over time, as this can be an indicator that they’re considering making a planned gift.

One way to tell if someone is ready to make a planned gift is to look at indicators of their financial health. For example, do they own their own home or have significant equity in it? Do they have a retirement plan in place? Do they have any outstanding debt?

You can get some of this information by asking the prospect directly or by looking at public records such as property tax assessments and deeds. If you’re unsure about how to interpret the information you find, you can always consult with a financial planner or accountant.

Yet another indicator that someone might be ready to make a planned gift is if they already have an estate plan in place. This could be anything from a will or trust to a more complex arrangement such as a charitable remainder trust. If you’re not sure whether someone has an estate plan, you can ask them directly or look for clues such as the presence of life insurance policies or investments with named beneficiaries.

5. Passion for the Cause

Donors who are passionate about your organization’s mission are much more likely to want to ensure that your work continues long into the future. If someone believes strongly in what you’re doing, they’ll likely want to support your organization beyond their lifetime.

Many people want to know that their life made a difference and that their philanthropy will live on long after they’re gone. If someone expresses an interest in leaving a legacy, it’s likely that they’ll be open to discussing planned giving options with you.

People who express an interest in leaving a lasting legacy are typically interested in making sure their philanthropy extends beyond their lifetime. By including charitable gifts in their estate planning, they can ensure that their values and passions live on through the causes they care about most. These individuals crave opportunities for continued impact and often seek ways (such as naming opportunities, endowments, or other memorials) that will keep their memory alive while also supporting the important work of nonprofit organizations.

6. (Bonus) The Most Effective Way to Discover Planned Giving Prospects … Ask at the Point of Donation

One great technique for finding out if someone is interested in planned giving is to ask them. At one organization I worked, we included a survey at the end of the digital donation process and one of the questions asked if the donor would like a free will kit. These leads were forwarded onto our planned giving manager for follow up.

As a fundraiser, it’s important to know how to identify potential planned giving prospects. By keeping an eye out for certain signs, such as longtime loyalty or recent major gifts, you can start cultivating some of your best prospects and move one step closer to securing those large gifts!